May 03, 2011
I haven't posted in 6 months!  Yikes.  I want this blog to live, not die, so I'm committing to post at least twice a month.  Hopefully with pictures, I mean puppets ARE visual.  But I don't really have a camera working right now so I have to use my phone mostly.  If I can't post a picture, then at least an idea.  I always have ideas. ;)

I have made a few quick puppets in the last week or so to round out a song we did last Sunday for Children's Sunday.  It was a simple song, but I think it turned out cute.
I needed a fish, a bird and a flower.

I have a snap shot of the unfinished fish, but I'll have to take a pic of the others and post them later.
Here's the fish body: 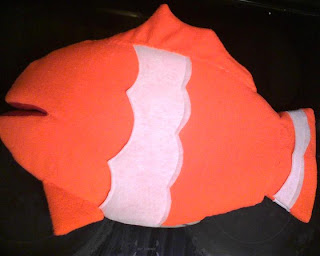 I literally drew out a fish shape, cut it out of foam, glued it together and covered with fleece! Easy!  I did give him eyes and he was done!  The song wasn't blacklight, but I went ahead and made him out of blacklight fabric so I could use him either way.

Popular posts from this blog

September 28, 2011
Our team has always used a stage made of PVC for budget reasons.  I've reconfigured it a few times over the years.  The one we have now is the one I like the best so far.  Someone asked me to share it with them so I thought I would post it here in case anyone else was interested. First of all there are 3 parts to the finished stage and one person could put it together alone, but two make it easier. There are two poles that go across the middle horizontally to hold everything together. And there is the actual stage part that folds up like an accordion. Here it is from the side folded up. Here it is unfolded and the two long pieces placed horizontally in the back.  One at the top and one lower.  This second bar really adds to the stability of the whole stage and keeps puppeteers from moving the back curtain as they go in and out. Here is how we add the curtains. Our curtains are in 4 parts.  The front, 2 wings and the back middle.  They are all doubled becaus
4 comments
Read more

February 24, 2015
I made a new puppet over the weekend.  She is going to be used in some skits for Wednesday night kids' lessons at church.  We use a pre-written skit from a company called High Voltage Kids and this unit calls for a girl named Giddy.  Giddy is a little country girl who wants a pony. Here she is: I used this shape as a base and adapted it as I went.  I wanted to try something different and I like the elongated mouth shape.  I think she turned out very cute.  She is the first puppet I ever made for myself and I can't wait to use her next week! I will use this pattern shape again, but with more modifications.  I didn't sew her mouth, it's glued. I prefer to sew, but when I'm working with a new design I sometimes get ahead of myself and forget a step.  It may sound silly, but it happens.  Just like I never remember to take pictures of the process. One day I will plan the photos and actually remember to take some. The best part about this puppet is that I only
3 comments
Read more

November 05, 2018
So, why black light? First of all, using black light is just cool. It's so vibrant and colorful.  But mostly there are things you can do in black light that you can't get away with in regular lighting situations.  Black light can be magic! If you want to start a black light ministry you need to understand the principles of black light theatre. Black light is UV lighting that reflects white and fluorescent colored items like paint, fabric, poster board and paper. The principle of a black light show is to have everything blacked out so that only the colors of the puppets, props or clothing show. You can create anything your imagination dreams up for a black light show! Generally the colors that glow best are white (not all whites glow), neon pink, neon orange, neon green and neon yellow.  Occasionally you can find some neon blue and purple but they don't show as bright as the other colors.  Since you have a limited color palette you must be cr
Post a Comment
Read more